On this episode of PRAISING KANE we’re back in the silent era with Carol Kane, but this time in a broad Mel Brooks-ian comedy! Gene Wilder directed, wrote and starred in 1977’s THE WORLD’S GREATEST LOVER, a silent-era chuckler about a baker (Wilder) who travels to Hollywood in order to become the next Rudolph Valentino, despite an unfortunate collection of nervous tics. It’s plenty wacky, and awfully corny, but does it hit the mark or fall flat? Listen and find out! 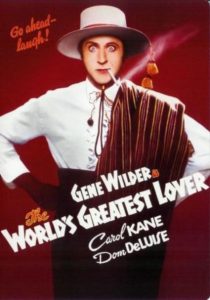