On this pulse pounding episode of George Kennedy is my Copilot we’re looking at the techno-thriller/Death Wish knockoff THE HUMAN FACTOR from 1975 featuring George Kennedy mowing down the left-wing terrorists who murdered his family. With a score by Ennio Morricone, a supermarket massacre, some top-notch wailing from GK and – of course – Shakidu, the movie really does have it all. But is it any good? Let’s find out! 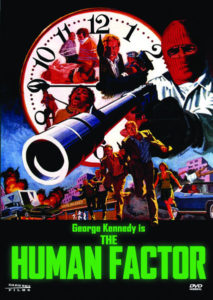