Phillip Hammer (John Stockwell) and Marlowe Chandler (Michael Dudikoff) are a couple of goofs who find themselves wandering a strange new post-apocalyptic world after spending 15 years in a bomb shelter in Albert Pyun’s wild, new wave-y action comedy RADIOACTIVE DREAMS!  Featuring a pounding soundtrack, lizard people, swearing kids, and – of course – the great George Kennedy, it’s our main topic on this episode of George Kennedy is my Copilot which also features digressions on what celebs we might be friends with, Sinex nasal spray, the untimely death of Gilbert Gottfried and SO MUCH MORE. Check it out!

And be sure to pick up a copy of Radioactive Dreams: The Cinema of Albert Pyun by Justin Decloux over at the Golden Ninja Video website! 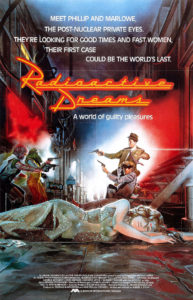 On this episode of The Films of John Singleton we’re doubling up one of his most interesting – and prescient – features with a film from one of the biggest franchises of all time! We start by taking a look at 1995’s HIGHER LEARNING, a sometimes stodgy but ultimately worthwhile look at the various troubles and conflicts that occur among a group of college freshmen. Then we move onto the eye-blistering neon of the big-budget 2003 sequel 2 FAST 2 FURIOUS!

Try to avoid whiplash on this one. Check it out!

Check out John Singleton being interviewed on Charlie Rose in 1995.