On the return (for the final time?) of FORGOTTEN GEMS? we’re watching Denis Levant and Mireille Perrier in Leos Carax’s feature debut BOY MEETS GIRL from 1984. Equal parts dark comedy, and tragic (sometimes surreal) romance, the film brings two recently jilted lovers together (eventually) despite the omnipresent distractions of tap dancing, music, pinball, and just trying to exist in your early 20s. It’s stirring, odd, and captivating, but did we understand any of it? Listen and find out!

Check out our Wild in the Streets archive right here.

We’re getting WILD IN THE STREETS with Charles Bronson and Telly Savalas in the New Orleans-set Eurocrime classic VIOLENT CITY from 1970. The plot involves Bronson’s retired assassin Jeff Heston getting revenge on those who left him for dead, including the woman he loves (played, naturally, by Jill Ireland). Sergio Sollima’s VIOLENT CITY features some dynamite action sequences, some terrific performances and some disturbing misogyny that left us – wait for it – conflicted. It also features a wonderful soundtrack from Ennio Morricone, that the movie takes great advantage of. CHECK IT OUT!

Alejandro Jodorowsky returns to filmmaking after a nearly ten year absence with the surreal horror of 1989’s SANTA SANGRE. Filled with wild, controversial imagery, our JodoWOWsky hosts trace its inception, the relationship between Jodorowsky and producer Claudio Argento, the involvement of four of the Jodorowsky children in the production, the taxing filmmaking process, the suggested involvement of Jack Nicholson and Anjelica Huston and SO MUCH MORE. We also discuss the feature length SANTA SANGRE documentary FORGET EVERYTHING YOU HAVE EVER SEEN: THE WORLD OF SANTA SANGRE from 2011, which brings much of the cast and crew together to recount some truly strange stories about the film’s inception and legacy. All this and the latest Jodorowsky news, so CHECK IT OUT!

Check out the Cadabra Records release of Fabio Frizzi’s THE EYES OF THE CAT at: https://cadabrarecords.com/collections/the-eyes-of-the-cat-by-jodorowsky-and-moebius

On this episode of HOW DO YOU DO, FELLOW KIDS? we’re continuing our look at the life and career of Steve Buscemi with the big-screen adaptation of the anthology TV series TALES FROM THE DARKSIDE. It’s TALES FROM THE DARKSIDE: THE MOVIE, which features adaptations of stories by Stephen King (adapted by George A Romero!) and Sir Arthur Conan Doyle, alongside an all-star cast including Deborah Harry, Christian Slater, Julianne Moore, David Johansen, James Remar and – of course – STEVE BUSCEMI! How does it stack up to other anthology films? LISTEN AND FIND OUT. We also discuss Steve Buscemi’s favorite albums, whether mummies are scary, our recent health issues and SO MUCH MORE.

Check out the entire archive of How Do You Do, Fellow Kids? right here.

We’re getting WILD IN THE STREETS with Lucio Fulci’s sole eurocrime effort CONTRABAND from 1980, featuring Fabio Testi as a boat smuggler who finds himself at the mercy of Marcel Bozzuffi’s Il Marsigliese with – SURPRISE – violent consequences! Featuring plenty of trademark gore, particularly in the blood-soaked climax, as well as a funky Fabio Frizzi score and Sergio Salvati photography, it’s a Fulci film through-and-through.. for better or for worse. CHECK IT OUT! 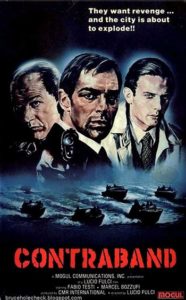 Over 10 episodes of WE DO OUR OWN STUNTS we’ve seen Jackie Chan struggle for respectability and recognition in martial arts films. There have been high and low points, but we always knew his launch to stardom was coming.. and now here it is! On this episode we’re looking at Yuen Woo-ping’s SNAKE IN THE EAGLE’S SHADOW, the film that was Jackie’s first step towards international stardom. But how did it come about? We look at how Jackie was leant to Seasonal Films, his first meeting with producer Ng See-yuen, his history with Yuen Woo-ping’s family and plenty more. CHECK IT OUT! 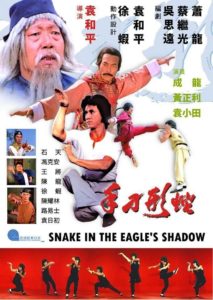 Check out the entire WE DO OUR OWN STUNTS archive right here.

On this very special 100th episode of Cinema Smorgasbord we kick off 2022 with the wonderful Sarah Jane to look at another George Kennedy classic on GEORGE KENNEDY IS OUR COPILOT. This time we’re looking at the mind-bending horror of Adam Simon’s BRAIN DEAD. Penned by the late Charles Beaumont, the film features both Bill Pullman AND Bill Paxton, with the former having to question his reality after an accident leaves him with potential brain damage! We also discuss the rise and fall of Breath Asure, celebrity pitchmen, face blindness and – of course – all things George Kennedy. CHECK IT OUT! 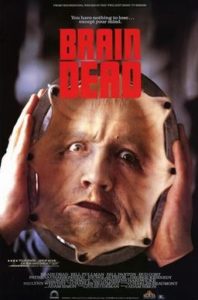 PRAISING KANE returns with one of Carol Kane’s finest performances, and a truly bizarre cult item. It’s 1978’s THE MAFU CAGE, and we guarantee you’ve never seen anything quite like it. Featuring incest, colonialism, orangutan murder and so much more, the film has gained a strong following over the past decade, and we’re here to find out why. But we’re not alone! Joining us is Cinepunx contributor and film programmer Adrianna Gober to help us unlock the secrets of The Mafu Cage! 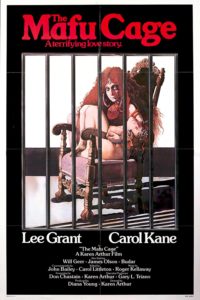 Check our some recent interviews with Carol Kane about her career and her Academy Award nominated performance in HESTER STREET.

Here’s an interview from The New Yorker Radio House

and Here’s an interview with Vulture.

On this episode of WILD IN THE STREETS we continue our look at the Eurocrime films of the 70s (and beyond) with Sergio Sollima’s 1973 poliziottesco film REVOLVER, starring Oliver Reed and Fabio Testi. Featuring a dynamite score from Ennio Morricone, the film has Reed’s prison warden Vito Cipriani being blackmailed into releasing a prisoner after his wife is taken hostage. Featuring a twisty plot that ends in pretty depressing fashion (our favorite!), it’s both a successful action film and a critique of oppressive governmental infrastructure. FUN! But is it any good? Let’s find out!

We made it! Ten(-ish) movies deep, Jackie Chan’s career is floundering. Desperate for a hit, Lo Wei pairs him with James Tien and Bruce Leung for a western-inspired fantasy action epic featuring bizarre twists, excessive face-ripping, and music shamelessly stolen from Star Wars and.. heck.. let’s make the whole thing 3D! MAGNIFICENT BODYGUARDS may have been Jackie’s final film before his breakthrough role in SNAKE IN THE EAGLE’S SHADOW, but it’s far from forgettable. Let’s check it out! 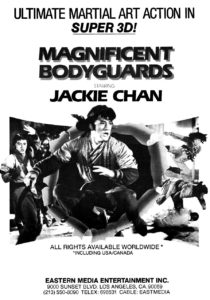