Check out the full Wild in the Streets archive right here

On a brand new episode of WILD IN THE STREETS, we’re going One Step Beyond with Warhol superstar Joe Dallesandro in the sleaze-filled home invasion thriller MADNESS from director Fernando Di Leo. Featuring plenty of uncomfortable nudity and most of the soundtrack to Caliber 9, MADNESS has hunky Joe terrorizing a married couple (along with the wife’s seductress sister) while trying to uncover some stolen riches stashed in their fireplace. All that, a giant poster of John Travolta that looms menacingly over the proceedings. Is it any good? Listen and find out!

On this episode of Cinema Fantastica we’re traveling to the 2017 Beyond Film Festival in Los Angeles, California and pitting the 2016 Ugandan action film BAD BLACK against the 2017 German-Austrian slasher COLD HELL. From the creators of the worldwide cult sensation WHO KILLED CAPTAIN ALEX?, BAD BLACK has a similar mix of microbudget action, comedy and drama, accompanied by the ever-present commentary from a video joker, while COLD HELL pits a Turkish immigrant (an incredible Violetta Schurawlow) working as a taxi driver against a religious fanatic targeting women in Austria. Which film will reign supreme? Listen and find out!

Check out our Wild in the Streets archive right here.

We’re getting WILD IN THE STREETS with Charles Bronson and Telly Savalas in the New Orleans-set Eurocrime classic VIOLENT CITY from 1970. The plot involves Bronson’s retired assassin Jeff Heston getting revenge on those who left him for dead, including the woman he loves (played, naturally, by Jill Ireland). Sergio Sollima’s VIOLENT CITY features some dynamite action sequences, some terrific performances and some disturbing misogyny that left us – wait for it – conflicted. It also features a wonderful soundtrack from Ennio Morricone, that the movie takes great advantage of. CHECK IT OUT!

Paul Bartel POPS THE CLUTCH and brings the world the gory sci-fi satire DEATH RACE 2000 in 1975, a box office smash that remains a popular (and influential) exploitation film and a jewel in Roger Corman’s New World Pictures catalogue. On this episode of BARTEL ME SOMETHING GOOD we look at how the film came to be, the difficulties in filming (including David Carradine nearly being replaced by Lee Majors!), and the enduring legacy of the film. FRANKENSTEIN SCORES!

Check out the July, 1978 issue of Take One magazine with the article “Another Evening with David Carradine” written by Paul Bartel

We continue our chronological look at the career of Carol Kane on PRAISING KANE with the surreal 1981 French drama THE GAMES OF COUNTESS DOLINGEN, partially based on the works of Unica Zürn (with a bit of Bram Stoker thrown in for good measure). A complex, twisting and often quite shocking film, it puzzled and intrigued our hosts who came away from it with two very different perspectives, and sparked a conversation about how much knowledge (or research) should be expected from an audience before watching a film. It’s more fun that that sounds! CHECK IT OUT!

The film can currently be viewed on archive.org right here.

Alejandro Jodorowsky returns to filmmaking after a nearly ten year absence with the surreal horror of 1989’s SANTA SANGRE. Filled with wild, controversial imagery, our JodoWOWsky hosts trace its inception, the relationship between Jodorowsky and producer Claudio Argento, the involvement of four of the Jodorowsky children in the production, the taxing filmmaking process, the suggested involvement of Jack Nicholson and Anjelica Huston and SO MUCH MORE. We also discuss the feature length SANTA SANGRE documentary FORGET EVERYTHING YOU HAVE EVER SEEN: THE WORLD OF SANTA SANGRE from 2011, which brings much of the cast and crew together to recount some truly strange stories about the film’s inception and legacy. All this and the latest Jodorowsky news, so CHECK IT OUT!

Check out the Cadabra Records release of Fabio Frizzi’s THE EYES OF THE CAT at: https://cadabrarecords.com/collections/the-eyes-of-the-cat-by-jodorowsky-and-moebius

The entire WE DO OUR OWN STUNTS archive is available right here.

On this episode of WE DO OUR OWN STUNTS, we continue our chronological look at the career of Jackie Chan and – surprise – Jackie is famous now! After the massive success of Snake in the Eagle’s Shadow and Drunken Master, Jackie returns to Lo Wei who decides to dust some unreleased Jackie features off the shelf and rush them into cinemas. The first is the supernatural kung fu comedy SPIRITUAL KUNG FU, which features five bright white “ghosts” in red fright wigs (who arrived on a meteor) teaching Jackie the five style fists, while a murder mystery plays out in the shaolin temple! Features Jackie shoving living animals down his pants and ghost busting (via urination). CHECK IT OUT!

On this episode of HOW DO YOU DO, FELLOW KIDS? we’re continuing our look at the life and career of Steve Buscemi with the big-screen adaptation of the anthology TV series TALES FROM THE DARKSIDE. It’s TALES FROM THE DARKSIDE: THE MOVIE, which features adaptations of stories by Stephen King (adapted by George A Romero!) and Sir Arthur Conan Doyle, alongside an all-star cast including Deborah Harry, Christian Slater, Julianne Moore, David Johansen, James Remar and – of course – STEVE BUSCEMI! How does it stack up to other anthology films? LISTEN AND FIND OUT. We also discuss Steve Buscemi’s favorite albums, whether mummies are scary, our recent health issues and SO MUCH MORE.

Check out the entire archive of How Do You Do, Fellow Kids? right here.

We continue our chronological look at the career of the great Paul Bartel with his feature length debut PRIVATE PARTS from 1972. Equal parts perverse and hilarious, it’s a film that is filled with twists and turns and set the blueprint for much of what was to come from the always unpredictable director. We’re also looking at Bartel’s 1969 short film NAUGHTY NURSE, which showed that Bartel’s taste for boundary pushing was something that came about very early in his career. 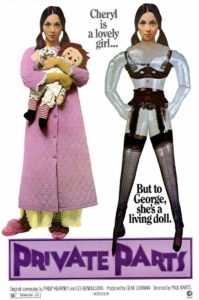 “Have you checked on the children?”

On this episode of PRAISING KANE we continue our chronological look at the career of the wonderful Carol Kane with the 1979 thriller WHEN A STRANGER CALLS. Best known for its incredibly tense first twenty minutes, the film takes some unexpected – and odd – twists and turns, with a private investigator played by Charles Durning on the heels of a serial killer. We also look at all the latest Carol Kane news, and have a promising update about our next episode! Check it out. 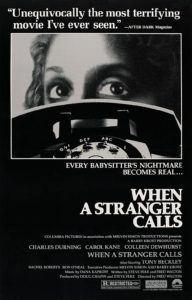